Imitation truly is the sincerest form of flattery

Over 20 designers copied my website and I don’t mind at all, it’s actually quite flattering. 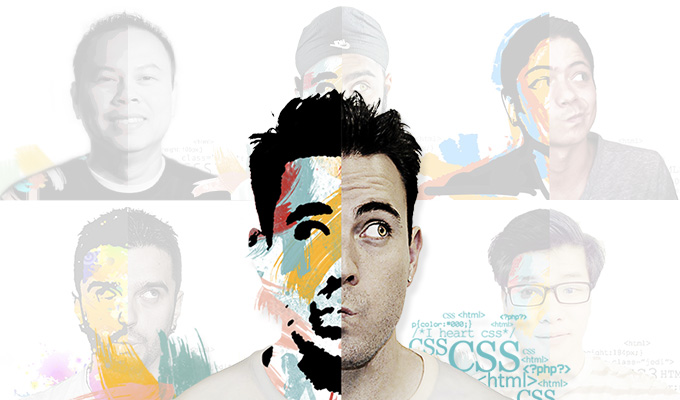 I created my first portfolio website way back in 2008 when I finally had enough design work to justify building a website. I was young, inexperienced and relatively unknown in the design community and I wanted to create a website concept that would help differentiate me from other designers.

Who was I? What were my main skills? How was I different? I was a designer who also liked to code, but how could I show this? I knuckled down for days on end, brainstorming different ideas for how I could present myself and my skill set visually. I came up with a bunch of initial ideas and hated all of them. Then one day, on the train home from work, I came up with an idea that I actually liked. I would split my face in half: one side would represent my creative design skills and the other would display my coding ability.

I sketched out some ideas and experimented with various Photoshop brushes and effects until I came up with a concept that I was happy with. Here’s my initial portfolio website homepage that I launched back in 2008, followed by an updated version that I created in 2012 (here’s how I did it). The launch of my website was a great success and I was lucky enough to be featured in a bunch of websites and publications around the world. Designers commented on how much they liked the concept and I was glad to hear that it even inspired some to redesign their own portfolio websites. Others, however, may have taken their inspiration a little bit too far.

Over the years, people have informed me of websites that they felt looked similar to mine. Some of these websites were actually direct copies of my code, while others had at least had their own unique touches added. Either way, I think the fine line between inspiration and plagiarism may have been crossed in some cases.

I’m not sure how you’d feel if you were in my shoes, but I know that many designers would feel offended. I myself find that I don’t really mind. In fact, I actually quite like it. I’m not saying that I condone plagiarism, but I think it’s nice to know that someone likes your website so much that they want one just like it for themselves.

Here are some of the websites I’ve come across that may or may not have been inspired by my own. I’ll leave it to you to decide. I’m not trying to point any fingers here and this is not a name and shame by any means. It’s simply a collection of websites that have made me smile over the years (and maybe boosted my ego just a little bit too). This last photo shows my half-face image being used on a billboard for a local design college in Bangalore, India (taken by Teja Bitra). Although I didn’t initially design the image for use in print media, it’s nice to see it out in the real world.

If you’ve seen any other websites that may have been inspired by mine, please let me know via Twitter, Facebook or in the comments below. I’d also like to know how you’d feel if you were in my shoes – flattered or offended? Like most things in life, I guess it’s just a matter of perspective.